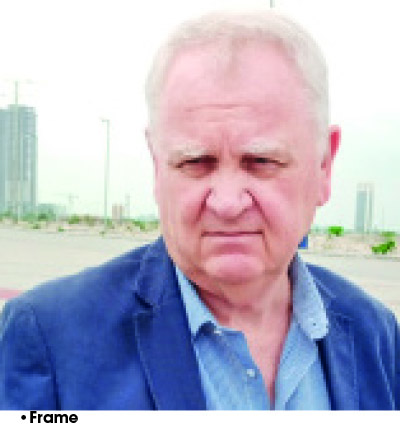 David Frame is the Managing Director of South Energyx Nigeria Limited. The Company is the promoter of the multi billion dollars Eko Atlantic City Project on Victoria Island, Lagos. South Energyx is a subsidiary of the Chagoury Group, it spearheads the planning and construction of the 21st century city combining space for residential, commercial, financial and tourist development.

And to demonstrate its commitment to deliver the project as at when due, South Energyx Nigeria Limited invited the Mayor of the City of London, Alderman Michael Bear, to the project site during which it showcased all the aspects of the project. Briefing the delegation, the Managing Director of South Energyx, Mr. David Frame, said the project was aimed at changing the face of the Lagos shoreline by finding a permanent solution to the incessant ocean surge that is threatening Victoria Island by reclaiming and protecting its infrastructure. In this interview with Daily Sun, the Managing Director fielded questions ranging from the aim of the city, its economic importance to Nigeria, employment potential and how the infrastructure will match world class facilities.

What led to this project?

It all began as an endeavour to protect the coastline of Victoria Island from sea erosion.The city is built on a land reclamation project surrounded by a sea wall built to last 1,000 years. On top of this rises a solution to the chronic shortage of prime real estate in Lagos, and the need for a new financial environment headquarters for Nigeria which is the largest economy in Africa. So, Eko Atlantic is not only providing vital space for people to live and work adjacent to Victoria Island.

It is a symbol of Nigeria’s pride and pivotal in achieving the nation’s pledge to become a top 20 economic power; a beacon for international business and tourism. The foundations have reclaimed the lost land that disappeared under the pounding waves of Atlantic surges during the past 100 years. The design and construction of the Great Wall of Lagos has already provided an effective marine engineering solution to stop further land depletion from the Nigerian coastline along Victoria Island.

How has currency fluctuations affected the cost of building materials?

In my experience, the market for building materials is far more stable than it ever was before. One of the biggest problems we used to have in the construction industry was rapid inflation and the cost of materials, together with the depreciation of the naira against all major currencies. In the past, we had to present full documentation to our clients, particularly if it was a government project, stating all fluctuations in prices. Since 2000, there has been increased stability in exchange rates and inflation in the country. This is again a reflection of the increasing strength of the naira on international markets. You just have to look at the skyline of Lagos and the new projects going on. Major cement suppliers are making plans to grow their capacity because their current facilities simply cannot support demand. The start of 2015 has seen a reduction in the value of the naira, a consequence of falling oil prices worldwide; however, there are already encouraging indications of a recovery.

To what extent will local content play a role in the initial development of Eko Atlantic?

We already have many local architects and engineers engaged in Eko Atlantic. The first development is being completed by a local architect. When you consider the number of plots we have, each one accommodating two and sometimes three buildings, you see that there are thousands of buildings that need to be constructed before the city is fully developed. Each one of these projects needs a surveyor, project manager, real estate agent, marketing manager, and so on. It just grows and grows. What we are finding is that more and more professionals are starting to recognise that Eko Atlantic is going to be a source of employment and revenue for them decades into the future.

It is more about relieving the pressure in Lagos State. You know that Nigeria is one of the fastest-growing megacities in the world so the pressure on Lagos is intense. Eko Atlantic is providing prime development land to give the space for business and commerce to expand and fulfil its potential. Secondly, we are looking at a project which will set example of African Excellence in the sense that when this project is completed, the clean and eco-friendly urban infrastructure of Eko Atlantic will propel Nigeria into a position of leadership in the economy of West Africa. The city is an example of how high standards of living can be created while meeting environmental responsibilities.

How much land has been reclaimed since the inception of the project?

In total, over 10 square kilometres of land will be reclaimed in which we have already completed about 65 per cent of the sand-filling and we have another one and half kilometre of sea wall to complete and on top of that we have to put into consideration the roads and infrastructures. So in terms of the rim works, we project that at the end of 2022-2023, we would have finished the sand filling and the sea wall. We have adopted a shape whereby the current is trained to run parallel to the coast and not to attack the walls and we are protecting the sand in front of VI and Lekki but it does not extend to Epe. As at when we reclaimed the land, we started with the drainages, roads, power cable distribution, water supply, surge system, IT services to give Nigerians that network they would require in a 21st century city

No, it will not go that far because the attack of waves is coming from the South West, so once it reaches landfall, that power is dissipated, so we are not transferring this problem to other states but there still remains issue of how to protect the coast of Lagos state, that is why i said the erosion is going on but what the Lagos state government has done is to embark on series of stripes of rocks which are 200m long above the sea and what it does is that it rests the erosion of the coast line and prevents sand from being lost. This is what the government is committed to as these structures have been used in the United Kingdom to rest erosion and maintain the shore lines as well as containing the sand between the stripes of rocks. The Lagos state government has built 18 of these along the coasts right up to alpha beach and embarking on producing more of these structures.

How strong is the wall?

The design of the wall is known as a rivetment and not something that we did overnight as they have been widely used to protect coastlines for 100 of years. With modern system and technologies, what is done is that one takes a standard rivetment and feed the information, local conditions, projections of rising seal levels, anticipated frequencies into a computerised card design programme. The system then creates a design but then engineers will want to prove that the work is resilient enough and that is when one embarks on physical model tests with various organisations in the world that conducts this test in laboratory conditions. As for us, we went to the Danish Hydraulic Institute in Denmark and they created a scale model that was designed by the computer and applied wave test to test it.

The dredging that we do does not impact on the coast line as this requires us to see the -15 contours which means that we have to dredge in waters deeper than 15 metres which we are currently doing at 25 metres deep. so we have gone way beyond what the regulations require.

An International security group is building up a plan for us that will provide the security for the entire city in which there will be CCTV cameras mounted round the key areas and that information will be fed to a Central Control room. The room will monitor what is going on in the city and will be in direct contact with mobile control groups that will go round and intercept anybody that is acting suspiciously and one of the things is that there is a global rule within Eko Atlantic that nobody will be allowed to park their cars on the street.

These are high buildings where one can buy single bedroom, two, three or four bedrooms, it all depends on what a developer wants to do. The Eko Village is developed in such a way that one will not have any reason to go outside to buy or sell anything. It will en-house schools, markets, social recreational centers, religious worshipping areas. It will be a one bus stop for all your needs. There will be mini port where occupants could clear the imported goods like the free zone. Every life activity in the city will be regulated because there will be no vehicles parked on the streets. Any vehicle seen on the street will be termed abnormal either that it was stolen or to be used for criminal purposes. In that way such vehicles will be towed away and never to get back to the owner. There will be guidelines given to every occupants so that no one will feel ignorant of the rules even though ignorance of the law is never an excuse for disobeying the rules.

Our concept is the vast majority of people who will live and work in Eko Atlantic. They will be from middle to advanced class level and around the world, people are looking to buy easier-to-maintain apartments and we have in the Eko Village development a complete range of small to medium apartments which will be affordable. Because a city is complete with all cadre of people, there is provision for all levels of income earners to be accommodated based on your financial income level. There are plans to develop schools and colleges as well as hospitals in this project, we are in the development stage and so these groups we are constant dialogue with them as they want to develop an international standard hospital so that they do not need to go overseas to have their medical treatment.

Impact of this project on GDP growth

We have created jobs for 300,000 to 350,000 individuals and that alone has impacted positively on the growth of the Nigerian economy as well as the state. We are creating an area, a financial district where we will recreate 5th avenue in New York here in Lagos. Eko Atlantic can be that financial hub for the continent of Africa and there is bound to be communication links from that hub to the rest of the world. So there are substantial amount of people who have indicated interest in participating in the development of this financial district.

I think from my experience, we see a high number of quality development. If you drive around Lagos Island, Ikoyi, Victoria Island, you will see some very interesting buildings built to a high standard. There are buildings where one can say he or she has grade standard but all the development in Eko Atlantic will be of international or high standard. We have people discussing with us on the possibility of building a 5-star hotel, so that is our motto, we are designing and building a city of international standard worthy of the 21st century.