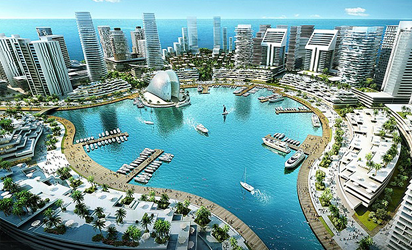 Developers and promoters of Eko Atlantic City, a mixed use coastal city being built beside Bar Beach, Victoria Island, Lagos, Messrs South Energyx Nigeria Limited, has noted that the development of the city standing on 10 million square metres of land reclaimed from the ocean and protected by 8.5 kilometre long sea wall, will permanently address the perennial flooding problem of Victoria Island and Lekki phases 1 and 2 when the protection wall which is nine metres above sea level is completed.  The Managing Director of South Energyx, Mr. David Frame who disclosed this to Vanguard Homes & Property during the tour of the sprawling city believed to be the size of Manhattan’s skyscraper district, USA, said the development of the multi-billion dollars project is an intervention to flooding problem in Victoria Island and its environs, having understood the terrain and its problem before embarking on the project that is self-sufficient and sustainable with state-of-the-art urban design, its own power generation, clean water, advanced telecommunications, spacious roads, and tree-lined streets. Frame who stated that Ahmadu Bello Way along Bar Beach which used to be ravaged by flooding does not experience flooding any more because of the measures put in place by the developers of the ongoing city project, pointing out that “It is not true that our project is causing flooding problem to Victoria Island as all drainage channels are well constructed and directed”.

According to him, the series of drainage networks in Victoria Island were built to channel water from the South side of Victoria Island, being the border with Eko Atlantic, towards the North side of Victoria Island where the water exits into the Lagos Lagoon, the Commodore Channel, and Kuramo Waters. He added that the general topography of Victoria Island slopes towards Ikoyi, stressing that this is readily observed along Akin Adesola Road linking Ahmadu Bello Way to Ikoyi via Falomo Bridge, insisting that the slope is clearly discernible. Explaining the scope of drainage network in the city, Frame said “Eko Atlantic City has been designed to protect Victoria Island and the early phases of Lekki from coastal erosion and flooding due to ocean surges. “Today, the drainage network in Eko Atlantic is already proving to be effective. The road network in Eko Atlantic City has yet to be inundated by rain water even during heavy rain storms. During the design stage of Eko Atlantic City, it was apparent that the road systems within the City would require an independent drainage network to ensure the proper evacuation of water off the road surfaces. “In order to be able to create an independent drainage network there was a need to be a design for a canal system running throughout the middle of Eko Atlantic City. This canal system would receive all the water which flows from the City’s roads into the underground drainage network. “The solution conceived met all the criteria required for an independent drainage network. Absolutely none of the water collected in the City’s roads would flow into the existing drainage networks of Lekki and Victoria Island. “The flow of water throughout the different areas of the drainage system in Eko Atlantic to the different drainage discharge points in the Eko Atlantic Canal does not interact with Victoria Island at any point. Building the drainage network in Eko Atlantic City is a precise task which is repeated numerous times throughout the project. “To begin, concrete pipes are fabricated in the pipe factory located in Eko Atlantic City. Storm water drainage pipes in the pipe factory vary in size from 30 cm in diameter to the largest being 150 cm in diameter. When the pipes come out from their mould they are left to cure for three weeks to allow the pipes to achieve full design strength. Disclosing that the city is dependent on modern and efficient master-plan that is self-sufficient and sustainable, South Energyx boss said the city which is bigger Victoria Island, comprises business district which is intended to be the head of financial nucleus in Africa continent, Marina district that is meant to serve as residential and commercial area for residents of the city and largest shopping mall in Africa continent. He said “For savvy investors, Eko Atlantic City represents far more than just surging Lagos land value. As Nigeria continues its unstoppable trajectory to become the financial capital of Africa, investing in Eko Atlantic opens unprecedented opportunities for tapping into the wider potential of the continent as a whole, widely recognised as the world’s most promising growth horizon”. Informing that Azuri Peninsula which is the most prestigious residential area in the city, Frame said the occupation of the towers which is meant for upper class people, will be 2021, adding that the towers comprises town houses. The managing director of South Energyx who stated that the city was registered as a free zone and has traffic free zone, said they city boasts of advanced infrastructure which include uninterrupted power, clean water, underground drainage and world class communication designed to the highest standards, meeting present and futures demands. “The city comprises independent 24/7 power supply, water and waste water treatment plants, fiber optic communication connections to every plot of land, plots of land are delivered with connection to utility services, elevated street levels to accommodate basement parking above ground water. “We are building in a city specifically planned for medium to high density development. Value added amenities within the city include 10.2km long waterfront promenade, 2 large marinas connected by an internal water-way”, he noted. Pointing out that the city is being built with locally sourced materials, Frame said the project is privately funded by South Energyx Nigeria Limited, the developers and city planners, a subsidiary of the Nigeria-based Chagoury Group of companies, working in strategic partnership with the Lagos State Government and supported by the Federal Government of Nigeria. He said notable national and international banks have been quick to capitalise on the opportunities with some of Nigeria’s biggest banks such as FCMB, First Bank, Access Bank and Guaranty Trust Bank partnering with Eko Atlantic, with support from BNP Paribas Fortis and KBC.