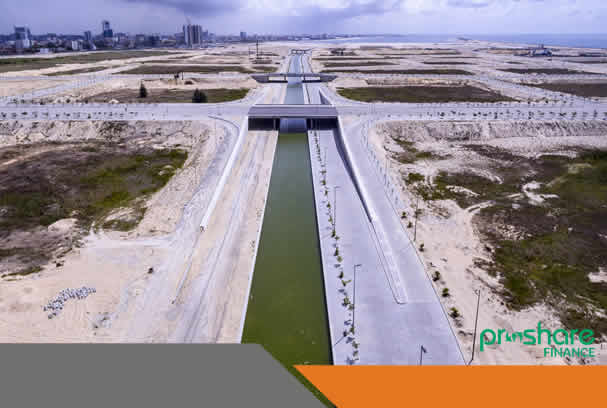 Eko Atlantic is a strategic new coastal city being built on Victoria adjacent to Lagos, Nigeria, to solve the chronic shortage of real estate in the world’s fastest-growing megacity. It is a focal point for investors capitalizing on rich development growth based on massive demand- and a gateway to emerging markets of the continent.

With a valued investment of about $300m, Eko Atlantic has been described as one of the world’s cutting edge new cities serving as a gateway to emerging markets of the continent.

When completed it should stand out as the prime real estate in West Africa and the new hub for financial and economic activities in Nigeria.

In this article we bring you 5 key things to note on the Eko Atlantic City.

Standing on 10 million sqm of land reclaimed from the ocean and protected by an 8.5km long sea wall, Eko Atlantic will be the size of Manhattan’s skyscraper district.

It will be self-sufficient and sustainable, and has a state-of-the-art urban design, with its own power generation, clean water, advanced telecommunications, spacious roads and tree-lined streets.

To date, 6,5 million square metres  of land (out of the estimated 10million) has been reclaimed, with the Great Wall of Lagos having reached 7.0km in length (total length of the wall will be 8.5km).

The cost of a plot of land is dependent on its size and location, while Infrastructural development has achieved substantial completion in Phases 1 and 2 (both phases total a combined area of 5 million square metres), with a high portion of the road network already defined with kerb lines and block paving together with sidewalks, street lighting and planted trees.

Other developments will include;

This is a Grade A 16 story office tower, which has floors of office space available for rent. Each floor measures 495.3 m2 (Net) and offers high grade quality office space, as well as other amenities in the building. Rent is available upon request.

Eko Pearl Towers is a condominium style residential development comprising of 5 high rise towers, offering 2 and 3 bedroom apartments as well as penthouse type apartments. The first tower was inaugurated in 2016 and the second tower was inaugurated in November 2017. This development has shop spaces are available for sale (with the possibility to lease). There are currently 12 spaces in total, with more under construction. There are about 6 spaces available

Azuri Peninsula is a development offering a superlative lifestyle of beautifully crafted homes with extraordinary luxurious living in the heart of the Marina District. Nestled in the serene Marina District among some commercial and retail development, the apartments offered will be stunning. This development is currently under construction. The first phase, comprising of Marina townhouses, retail spaces and three residential towers will be delivered in 2020.

This will be a luxury residential development on 20 floors, offering 2, 3 and 4 bedroom apartments for sale. This development is currently under construction.

Eko Energy Estate will be a 50 high-rise tower development of both residential, commercial and leisure facilities as well as logistical services geared towards the oil and gas sector. These developments will mainly rental properties when they are completed. The first 3 towers have progressed significantly.

Developers at the moment are taking advantage of the opportunities the Eko Atlantic city will bring in terms of infrastructure.

Other developments in the City will include: the Eko Shopping Mall, the Eko Atlantic School and a world class hospital.

Considering the challenge of flooding the main Lagos city has experienced over the decades, Eko Atlantic City developers have taken the conscious step to ensure that road systems within the City require an independent drainage network to ensure the evacuation of water off the road surfaces.

As the roads are built openings are installed at regular intervals along the kerb-line allowing for the flow of water to enter the underground drainage network. Storm-water collected in this manner flows via gravity and discharges into the Eko Atlantic City canal.

It is important to note that the storm water drainage system in Eko Atlantic City is completely below street level. There exist no open drains anywhere throughout the City.

Eko Atlantic City is also set out to become the strategic financial hub in West Africa and the entire Sub-Saharan African region, providing a conducive environment for businesses, multinationals and corporations to relocate their head offices.

The Business District encompasses a total area of 700,000 square meters. Along this sweeping avenue will stand mixed-use towers, turning the district into a powerhouse for corporate, financial, and retail activity.

It has the Eko Boulevard which is in the heart of Eko Atlantic City and is 60 metres wide and two kilometres long designed to typify Champs-Elysees in Paris, France and the Fifth Avenue in New York, USA.

The Boulevard will have an array of towers with an average of 35 floors, positioning it as the choice location for financial, business and economic activities.

The Eko Atlantic City project which should be home to 300,000 residents when completed, is 100% privately funded by South Energyx Nigeria Limited the developers and city planners, and is a subsidiary of Chagoury Group of Companies.

Lagos State as a strategic partner for the Eko Atlantic City and is also supported by the Federal Government.

According to the Lagos State Governor Akinwunmi Ambode the Eko Atlantic City will provide over 500, o00 jobs and also serve as a veritable source of Internally Generated Revenue (IGR) for the State.

Also, notable international and national banks are also capitalizing on the opportunities in the project, some of them include;